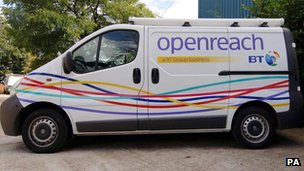 Telecoms regulator Ofcom has ordered BT to legally separate from its Openreach division – which runs the broadband infrastructure. It wants Openreach to become a distinct company with its own board, with non-executives and a chairperson not affiliated with BT. Ofcom also wants Openreach to have control over its branding and budget allocation. It should also have a duty to treat all customers equally.

Ofcom is preparing a formal notification to the European Commission to start the process. It has resisted calls from other telecoms companies to split Openreach off entirely.

Ofcom said BT had not gone far enough to address its concerns about BT’s ability to favour its retail business when making investment decisions in Openreach.

BT has said that they put forward proposals in July which were fair and sustainable in meeting Ofcom’s objectives. They will continue to work with Ofcom to reach a voluntary settlement that is ‘good for customers, shareholders, employees, pensioners and investment in the UK’s digital future.’